“Rise up, warriors, take your stand at one another’s sides, our feet set wide and rooted like oaks in the ground.”

I live in a military town, spent thirteen years in the Navy, and am married to a retired Naval Officer who now works in the Defense industry. So when military folks (service members and their spouses and families) get put up on pedestals for their sacrifice and service it makes me uncomfortable because, to me, people in the military are just people. There are good ones and bad ones and boring ones and ones who should be running the world–not because they’re power hungry but because they’re really that organized. But I see why the pedestal thing happens…or I’ve come to see why after reading articles like this one.

There are whole segments of the population who know nothing about the military and have only seen soldiers and sailors on TV.

And of course our military is in the news recently.

Here’s Brig Gen Norman Ham, [quoted in this Associated Press article on Yahoo!] commander of the 440th Airlift Wing, in an interview reflecting on the mixed outcome in Iraq.

I don’t aim to change people’s opinions about any of this, but maybe I can shed a little light on military people in my corner of the world. At the risk of opening up a can of controversy, here are my

Four Things the Press and Popular Culture Get Wrong About the Military:

1. People in the military are not actively seeking the next big conflict. It is our butts on the line any time troops or military might gets committed to combat, plus increased conflict means increased deployments and separations from our loved ones. Corollary: There is an idea floating out there that if you eliminate the military, you eliminate war. To me that’s like saying if you take away the police, you eliminate crime.

2. We are not all Special Forces Operators. Every job is important and can be every bit as dangerous. For example: the deck of an aircraft carrier is considered one of the most hazardous places in the world. Corollary: Spec Ops people are people too. Highly trained, skilled, physically fit people.

3. We do not all come back from conflict with PTSD. This is in no way to invalidate the true pain of service members and their families affected by post traumatic stress. Everyone is affected in some way by combat and military service, but that effect is not always negative. Many young people join the military for an opportunity to see some of the world. Some join for the educational opportunities. All, I think, are changed forever.

4. We do not wear our uniforms all the time. Though sometimes it feels like we do. And sometimes, like during training and conflict scenarios we actually do. But I know I was as fond of girl clothes as anyone else whose job was not the military.

And One Thing the Press Actually Gets Right: 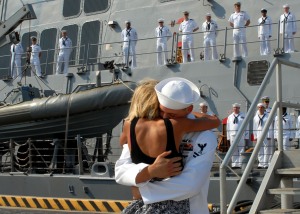 Homecoming is as romantic as it looks…for about thirty minutes then readjustment and reality sets in. My oldest daughter was two and a half when my husband left on a deployment and three when he came back. We weren’t really sure how she was going to react to seeing her Daddy again. What did happen: as soon as she saw him she ran up and jumped in his arms. She wouldn’t let him put her down for at least a half hour. And of course he was really OK with that. When we got back to the house, however, she wanted nothing to do with him, she didn’t even want him to read her a bedtime story. We had to slowly work him back into our daily routine.

So I’m not saying you shouldn’t thank military men and women for their service. I’m just saying that when you see someone in uniform in the airport or on TV, recognize that they are not that different from you. Not an alien race or even a warrior class…they’re just people getting the job done. They get on with things so you can too.

(All photos courtesy Navy.com and Navy.mil The ships pictured are the guided missle destroyers USS PORTER and USS COLE.)